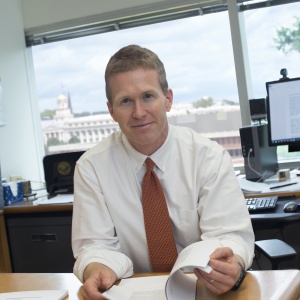 Todd Pettys is often asked to comment on recent Iowa Supreme Court decisions based on his research interests and his role as a law professor at the University of Iowa.

But it wasn’t until writing his recent book, The Iowa State Constitution, that he had the opportunity to delve deeper into the stories of the people, disputes, and judicial rulings that make Iowa what it is today. With the help of a student research assistant, he began the project in 2015 after being approached by Oxford University Press.

“When they called, I did some preliminary research and it was really irresistible,” Pettys says. “The story of Iowa’s constitution pulls together so many fascinating threads, ranging from the personalities of Iowa’s first generation of leaders, to the nation’s debates about slavery, to the rise and fall of political parties, to the emergence of a national currency, to the stories behind some of the buildings that many of us in Iowa drive by every day.”

And, as he began his research, Pettys said it became clear the book was necessary.

“Before this book, we really did not have any modern, comprehensive resource that would quickly orient researchers to the Iowa Constitution. Sources were scattered, thin, and sometimes unreliable,” he says. “My aim has been to provide people with a gateway to the key people, events, and judicial rulings they may need to look at when examining constitutional questions in this state.”

The book was published in December 2017 and includes an account of judicial rulings through June 30, 2017.  On his website, he periodically posts updates to take account of new rulings and other developments.

Though he says it would have been an enjoyable writing project under any circumstances, having student research assistant Ross Andrews help with the book made it all the more rewarding.

“I really like the mentoring relationships that faculty members often have with their students. It’s an honor to have the chance to be involved in people’s lives when they’re making big choices about what they want out of their careers and about what comes next. After spending a number of years in this line of work, you end up with a lot of people who worked with you once upon a time and who have gone on to do wonderful things, either here in Iowa or in far-flung locations,” Pettys says. “It’s a good arrangement for the students, too.  Working as a research assistant gives them a chance to contextualize and apply some of the things they’re learning in the classroom, and to see how what they’re learning bears on real-world questions that we’re facing.”

Pettys says the book has also given him priceless opportunities to talk with Iowans across the state.

“I’m visiting a number of Iowa communities, talking with groups about Iowa’s constitutional story. Folks find it more interesting than they might have expected – you don’t have to be a history lover to fall in love with this stuff,” Pettys says. “It generates really rewarding conversations about Iowa’s civic past and about the law as it stands today.”