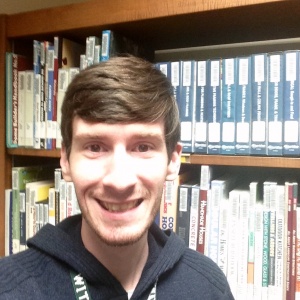 When Tyler Hahn began his Bachelor of Applied Studies (BAS) degree with an emphasis in creative writing, he dreamed of working in a library. Not only has he achieved that dream, but is now working on his third draft of a novel called Savage’s Letter. Hahn completed a substantial portion of the first draft of this book in his undergraduate novel writing course at the UI.

“The class focused on different dimensions of writing and each lesson built upon the previous one,” Hahn says. “The instructor always offered constructive criticism which greatly improved my writing over the semester.”

Tyler’s novel tells the story of a young man from Savage, Minnesota who has traveled to Africa on a mission trip with his older brother before he goes off to seminary himself. The novel is written in epistolary (letters and correspondence) to the main character’s fiancée, his parents who funded the trip, and his childhood best friend. The story itself is about choosing one’s destiny rather than settling on what has been handed to you.

Hahn’s own dream to be a librarian started in the first-grade when he was struggling with reading. His first-grade teacher recommended he visit the library over the summer and read. It was there, thanks to the children’s librarian at the Marcus Public Library, that Hahn learned to love reading.

Hahn graduated from Western Iowa Tech Community College (WIT) in Sioux City with an Associate’s degree before choosing to attend the University of Iowa as a distance and online student.

“I chose the BAS degree program because it offered the flexibility I needed to complete my education. I was able to take the core courses I needed to develop my writing skills while also building a career.”
In his current position as a librarian specialist at WIT, Hahn oversees the interlibrary loan process for campus students and circulation of materials to other institutions. He catalogs books and digital materials for an ever-growing collection.

Working and continuing his education at the same time allowed Hahn to apply tools and skillsets from his classes on the job.

“Having a bachelor’s degree led to a better life, says Hahn. “I was able to get my dream job and work in a rewarding environment.”