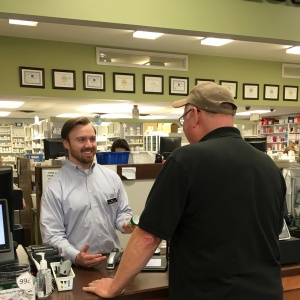 After working at an independent Waterloo pharmacy with his mentor, there was no doubt in the mind of Wes Pilkington, ’11 PharmD, that he, too, would be a pharmacist.

Bob and Cheryl Greenwood own Greenwood Drug in Waterloo, in addition to others. Bob Greenwood is also a pharmacist, and a pillar of the community. Greenwood is actively involved in health care issues on local, state, and national levels, and has received prestigious awards from the pharmacy profession.

Pilkington said he chose the UI College of Pharmacy because of its integration with the University of Iowa Hospitals and Clinics (UIHC) and its cutting-edge, forward-thinking approach to pharmacy education and practice.

“The other reason I chose the UI College of Pharmacy was because I had absolutely no desire to leave this great state after graduation,” Pilkington said.

After Pilkington graduated in 2011, he returned to Greenwood pharmacy and has worked to live up to the model set by his mentor.

A major highlight of Pilkington’s educational career was the opportunity to complete a five-week rotation on the psychiatric floor at UIHC. What he learned about mental disorders and medications to treat them has proven helpful to the patients he treats back home in Waterloo.

Pilkington serves as the primary preceptor (an adjunct faculty position) for a handful of students each year, which he says is one of the best parts of his current job. “It is extremely important to me that our future generations of pharmacists have a positive learning experience on their Community Pharmcare rotation,” he said.

Pilkington also participates in admissions interviews at the college, plays an active role in the professional mentorship program, and has spoken to students as part of the Dean’s Forum lecture series. He is passionate about passing his experiences along to future pharmacists and learning from pharmacists who have more years of experience in the field.