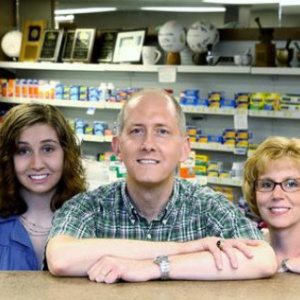 Thanks to a family tradition of Hawkeye pride and helping others, William “Bill” M. Drilling has been able to live his dream of giving back to all those who walk through the doors of his independent community pharmacy in Sioux City, Iowa.

Bill grew up around Drilling Pharmacy, his father’s business, where he witnessed firsthand the importance of pharmacy in the community. “I saw how my dad helped people, and that was what inspired me to become a pharmacist. There was no doubt in my mind that I wanted to do the same thing.”

Following his father and grandfather by enrolling at the University of Iowa, Bill received his Bachelor of Science in Pharmacy in 1985. “I wanted the best pharmacy education available, and I knew I would get it at UI,” says Bill. He went on to work at Drilling Pharmacy alongside his wife, Sharon – a Sioux City native who works as the pharmacy’s accountant and gift shop buyer.

Bill continues to contribute to the UI pharmacy community as a preceptor, mentoring students who choose to do their rotations at Drilling Pharmacy. “I became a preceptor so that I could show pharmacy students the life of a small businessperson and independent pharmacist,” says Bill. “My UI degree has had a tremendous influence on my professional life, and I want to give future Iowa pharmacists those same opportunities.”

Bill and Sharon’s two daughters, Sarah and Lindsey, continue the family’s Hawkeye legacy. Sarah is currently working towards a PharmD degree at the UI College of Pharmacy, while Lindsey is a junior in the School of Journalism and Mass Communication.

“It is essential for us to sustain the tremendous legacy of Iowa pharmacy,” says Bill. “We all must invest in the UI pharmacy community by helping future graduates achieve their potential and put their education and creativity to work.”